I first saw the famous video clip of Jimmy Webb from “Eyes on the Prize,” when it premiered on PBS in 1987. His 16-year-old face was angelic, guileless, plaintive as he articulated non-violence to deputy sheriff L.C. Crocker, who had stopped Jimmy from leading marchers to Selma’s Dallas County Courthouse.

In a key moment in that clip, trying to reason with the unreasonable about equality and justice, Jimmy says, “Sir, are you saying that if I have a quarter, and I’m black, and you have a quarter, and you’re white, that my quarter isn’t worth as much as your quarter?”

To see the difference in size and armament between Jimmy and Crocker was to see David and Goliath. How often do you see video of Biblical moments?

I next saw the clip in 2015 projected from a laptop while sitting in back of a crowded, sweltering art studio in Selma with about 100 high school students from around the U.S. who were traveling with Sojourn to the Past. Sojourn Founder Jeff Steinberg pressed pause, and from the back door of the studio, in sight of the Edmund Pettus Bridge, in walked Jimmy Webb. 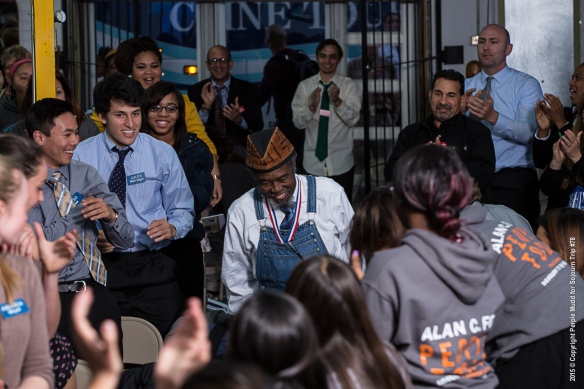 The room roared for about five minutes, maybe 10. Jimmy was impossibly small and large at the same time under his African cap, overalls, shirt and tie, and a medal commemorating the 50th anniversary of his Bloody Sunday march. He stood and accepted our applause as it rained down on him, salve for the savagery that had rained down on him in Selma in 1965 and for most of his seven decades. 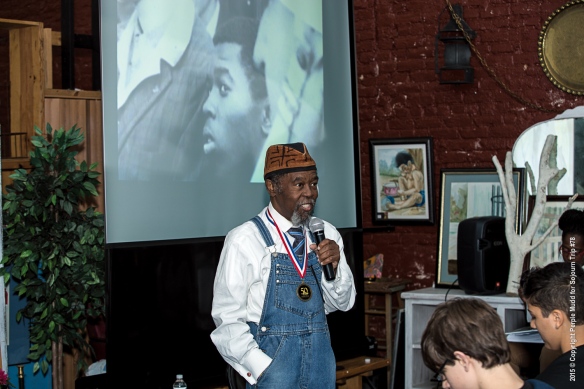 My journalism career had brought me into meetings with famous athletes, artists, authors, entertainers and politicians, but I had never met a Biblical figure. I had to know Jimmy better.

That night, the Sojourn program called for Jimmy to kick it with the kids. Someone asked what music he liked. “Abdullah Ibrahim.” An involuntary “woo!” escaped me, because Abdullah Ibrahim had made me cry in 1985 when I saw him perform on my college campus at the height of protests calling for the university’s divestment from South Africa.

Jimmy caught my “woo,” flashed that brilliant smile and loosed the first of a thousand cackles I would enjoy over the last 20 months of his life. Abdullah Ibrahim’s music was common ground that gave us a little extra to talk about after the Sojourn ritual of standing in line for photos and a hug and dropping a quarter into Jimmy’s collection for the shelters he was building for South African AIDS orphans. 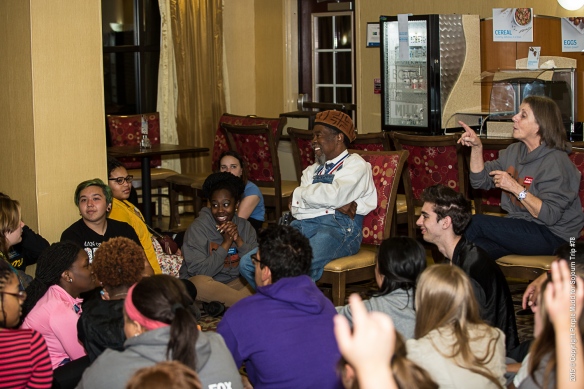 The next morning, I lucked into a spot next to Jimmy in the breakfast line. We got to talking for what has turned out to be one of the most important hours of my life, learning straight from David how to non-violently slay internal and external Goliaths. We shared brief biographies. I was flattered at how closely he listened to mine. Here are notes from his that I later put into my journal:

His “Eyes on the Prize” segment exhibits the courage, leadership, patience and wisdom he already possessed as a 16-year-old. I asked if the composure and fearlessness he showed there came from his upbringing or the training he received from the Student Non-Violent Coordinating Committee (SNCC). He said, “Both.”

He told me stories of his lineage more off-color than I should share here. He said that what looked like courage in “Eyes on the Prize” was just the knowledge that he already was dead. Racial violence was so common, assumed, sudden, random, unprosecuted and ingrained in everyday life that he and his peers expected short lives. That alone emboldened them to lead activist lives.

He spoke of his learning tenets of non-violence from SNCC leader James Lawson in Nashville. The philosophy of non-violence made sense, Jimmy said, because “we were outmatched” in any violent battle for rights and dignity. I asked his advice on how to put non-violence into action in my life. What stuck with me was to go slowly and accept small victories. He drew the analogy of a drunk who waited until 9am to start drinking instead of the previous day’s 8am. “If you get into something too quickly, you can end up getting out too quickly, too.”

I asked more details of his life’s journey. After the Selma-to-Montgomery march, he ended up in the Marines, sent to Vietnam. He saw no combat, but met a mentor, Guido, who eventually reached the Pentagon and offered Jimmy an adjutant’s position. Jimmy said: “I asked Guido, ‘Do you need an adjutant? Or do you need a butler?’ ”

Satisfied the position was legit, and with Guido navigating the necessary clearances despite Jimmy’s civil rights arrest record, Jimmy eventually was signing requisitions with the made-up title of acting undersecretary. “If you assume authority, people give you authority,” Jimmy explained. That was until Caspar Weinberger called him on it.

Jimmy continued working within the Reagan Administration. He was instrumental in helping establish Martin Luther King, Jr. Day as a national holiday. He helped negotiate the release of Nelson Mandela and escorted him from Victor Verster Prison. Jimmy now is a minister, public speaker, leader of tours to South Africa and builder of homes for children in South Africa, who have lost their parents to AIDS.

Jimmy parted from our Sojourn group that day. But I kept his words and his example close as I struggled with myself over the next weeks and months to grow into non-violence. We occasionally emailed and phoned each other until we next met in Youngstown in October 2015 for Non-Violence Week in Ohio. That event – founded via legislation introduced by Sojourn supporter Penny Wells and her students – includes a parade that I helped marshal along with several of her students whom I’d met on our shared Sojourn.

Near the podium at the end of the parade route, I ran into Jimmy. He was composing an invocation that would launch the post-parade community presentations. I joked with him that I expected to hear some Hebrew. When he took the stage a few minutes later, he referenced God, “who has brought us shabbat and shalom.” He made eye contact at too solemn a moment to smile and cackle, but I heard it anyway.

That night at Penny’s house, over the Amarula cream liqueur Jimmy brought from South Africa, we discussed a sermon I had heard on the radio that morning when the rest of the dial died as I was driving to Youngstown from Central Pennsylvania. The sermon was from Daniel 1:8. Jimmy broke it down from about seven different angles.

That type of conversation, interspersed with his civil rights movement memories, marked our hours together during several days of Sojourn school visits throughout Youngstown. Our bond strengthened. We decided he would stay with me and my family in April 2016 when he planned to visit the San Francisco Bay Area after finishing a Sojourn, on which my wife, Val, also traveled.

They arrived at our house together, grown so close that Jimmy was now family. We’d long been calling each other “brother.” Now it felt official.

Another adopted sister, Val’s former colleague, Heather, also was staying with us. We were up most of the night, enthralled as Jimmy would start sentences, “Well, then Martin said to me…” and “Nelson used to tell me…” How does someone speak that way and still sound humble? Maybe because listening while gazing upon his wizened visage, I still saw the open, guileless, beseeching face that lit up “Eyes on the Prize.” The man was whole when he was 16 and continued growing holier.

The occasion that brought Jimmy to the Bay Area was the bar mitzvah of Jeff Steinberg’s son, Justice. The weekend of Jimmy’s stay, we spoke more of the movement, a topic which by then also included many recent acts of violence against African-Americans by police and others, as well as the looming doom of a Presidential election. Jimmy continued to instruct and encourage me in von-violence, and we deeply explored religion and faith.

Organized religion is not for me. Whatever salvation it has offered others, including Jimmy, I see it as root evil…as divisive as the racism Sojourn helps heal. However, I am irresistibly drawn to people who strike me as spiritual. That’s part of what had me driving Jimmy that weekend not only to Justice’s bar mitzvah but also to Oakland’s First African Methodist Episcopal Church, where Jimmy was to lead a service with his lifelong friend, Rev. Dr. Harold Mayberry.

It turned out that Dr. Mayberry was too ill to join us. After a brief private prayer, holding hands in a circle with Jimmy and several ministers in Dr. Mayberry’s office, Jimmy took the pulpit. That will be my forever vision of him. We shared a few more phone calls, but I think of Jimmy as I last saw and heard him during the recording linked below, produced by the church, that will ensure Jimmy Webb’s spirit echoes through the ages. 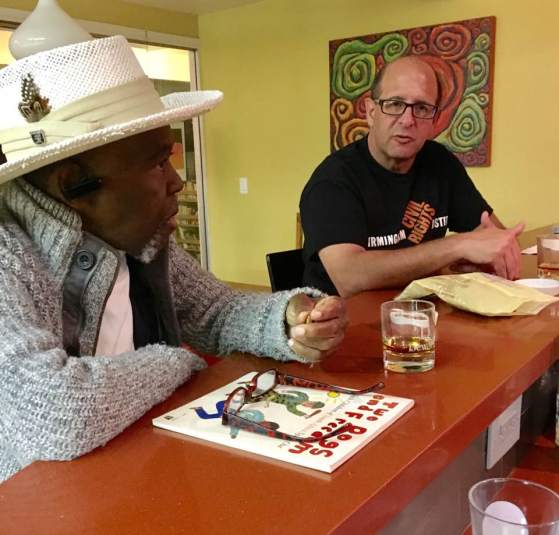